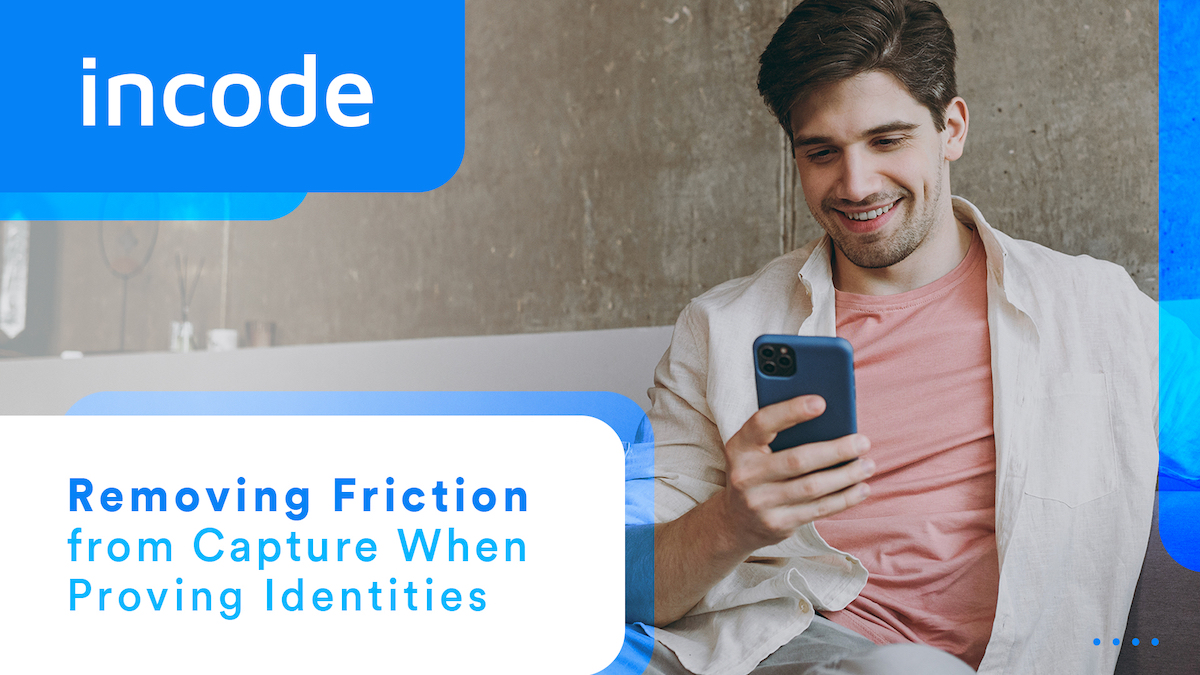 We use the word “friction” in multiple contexts. In identity proofing, friction results when it takes significant effort for a person to prove who they are. If it takes a user too long to prove their identity, the user may become frustrated and give up. This hurts businesses that depend upon digital onboarding for their customers.

Where can friction take place in identity proofing? During digital onboarding, friction may occur during two key processes.

One or both data types may also be used during authentication of a user whose identity has already been verified. Most commonly, the features of a live face may be compared against the features of the face that was registered with the account.

Ideally, an identity proofing application should be “frictionless” and should capture its data as easily as possible. Sadly, this is not always true.

How hard is it to capture identity data?

We take pictures with our smartphones all the time, so why should it be so hard to capture a picture of an identity document?

And we take pictures of ourselves all the time, so biometric image acquisition should not be difficult.

But there is a difference between capturing just any image and capturing a quality image for identity proofing. When capturing images of faces or identity documents, things can go wrong.

Checking quality after manual image capture is not enough

Rather than checking image quality long after the image is captured, some identity proofing applications immediately check the image quality. Automating the image quality measurement process at the smartphone (the edge device) provides a partial solution to the friction problem.

But it doesn’t solve the issue of poor image capture in the first place. When users must manually capture document and facial images, some images won’t be captured correctly the first time, and friction will result.

I recently experienced this friction myself when I used my smartphone to capture a facial image for my passport renewal. I manually took the picture, only to have the application tell me that the picture did not meet passport quality standards. I manually took a second picture, which was again rejected. The third picture was finally accepted, but by that point I was frustrated because of the friction of the process.

It’s not enough to automate image quality measurement. Ideally, the identity proofing application should also automate the capture of the image .

That is exactly how Incode’s solution works. It doesn’t depend upon the user to manually capture the images. Incode captures the pictures automatically without manual intervention. Incode’s algorithms ask the applicant to move the smartphone camera, ID, or face as needed, and rather than depending upon the applicant to manually press a button at the right time, Incode automatically captures a picture with the requisite quality.

This not only reduces user frustration and friction, but also speeds the process since the submission of substandard images is eliminated. Incode automatically captures the picture at the right time, saving time.

Automated image capture coupled with automated image quality measurement reduces friction dramatically. This video illustrates how the Incode smartphone application automatically captures facial images, government ID documents, and other documents such as credit cards without requiring the user to press a button to initiate the capture. The Incode application automatically captures the image, resulting in higher quality and faster onboarding.

This is just one of the ways that the Incode Omni Platform uses automation to remove friction from the identity verification and authentication processes. If you would like to learn more about why automated solutions offer less friction, higher accuracy, and more privacy than other solutions, contact us.