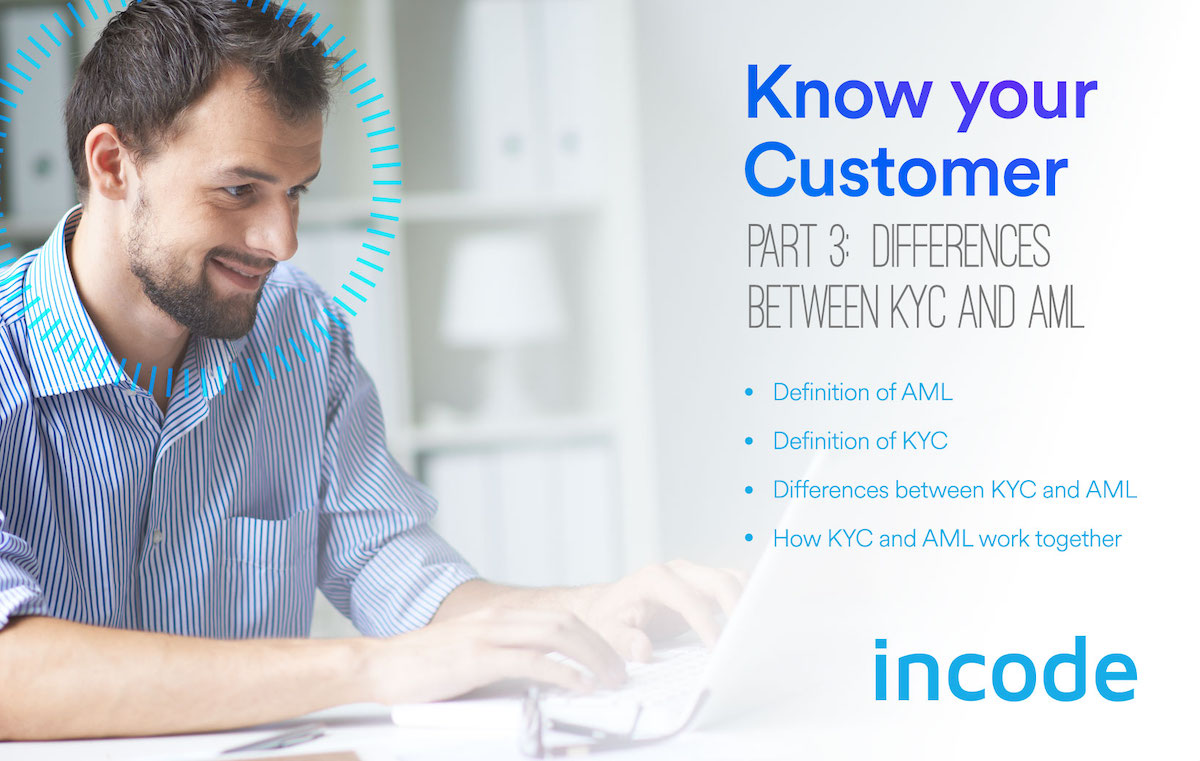 Know Your Customer (KYC) and anti-money laundering (AML) are terms often used in the same context or interchangeably. However, while they are closely related and have some overlap, they are distinct concepts. AML is a more general strategy for fighting financial crime which includes KYC as a specific application. Understanding the differences between these terms is important for appreciating how they work together. Here we’ll clarify what AML and KYC are, contrast their differences and consider how they work together within a comprehensive strategy for fighting financial crime.

Money laundering is the process of taking “dirty” or illegally gained funds and making them appear as if they came from “clean” or legal sources. This makes it harder for authorities to trace crimes back to their perpetrators because it complicates and confuses the paper trail associated with the funds. Trained investigators still may be able to unravel the web and identify the parties responsible, but it takes more work, costs more and can make a case more challenging to prove in court.

Money laundering typically involves a three-step process, according to FinCEN:

Once these steps have been performed, money will look “clean” to outside observers who don’t know what to look for.

For example, let’s say a criminal group wants to launder money obtained from narcotics trafficking. The organization receives a payoff for a drug shipment in small bills which can be deposited into various bank accounts without making a large deposit which would attract law enforcement attention. The funds are then transferred into a bank account owned by a legitimate business the criminal group has set up as a front, such as a restaurant. The restaurant uses the funds to pay employees, including some employees who are really drug dealers and are placed on the payroll even though they don’t actually do any work for the restaurant. In this way, the restaurant serves as a front to make payments to members of the criminal organization for their role in narcotics trafficking. But to outward appearances, the restaurant appears to be a legitimate business.

This illustrates how money laundering works. Anti-money laundering measures are designed to prevent this type of activity and protect citizens and countries from criminals and terrorists. To achieve this, AML regulations such as the BSA require financial institutions to report suspicious transactions. For example, banks may be required to report large cash deposits exceeding a certain amount or deposits coming from individuals or organizations which have been flagged as money-laundering risks. Financial institutions also are required to maintain records which enable law enforcement agencies to audit accounts suspected of being used for money laundering.

Know Your Customer shares AML’s broad mission of preventing money laundering, but it focuses specifically on preventing customers from using false identities to open or use financial accounts. Some money-laundering tactics use identity theft to create accounts or to transfer money between accounts.

For example, a criminal might steal someone’s identity, open an account in their name and use the account to launder money. This shields the criminal from having their own identity discovered, while leaving the identity theft victim potentially liable for crimes they didn’t commit. Similarly, a criminal might misuse someone’s bank account by pretending to be them in order to steal their money.

KYC aims to prevent these types of activities by taking steps to verify the identities of customers and the authenticity of transactions. These steps make it harder for criminals and terrorists to use fake identities or identity impersonation for financial crimes.

3. Differences between KYC and AML

The above definitions highlight the distinctions between AML and KYC. AML is a broader term encompassing all strategies for countering money laundering, including measures such as reporting suspicious transactions, and enforcing OFAC sanctions. KYC focuses more specifically on verifying customer identity and the authenticity of transactions. So KYC is a type of AML strategy, but AML also includes other strategies besides KYC.

4. How KYC and AML Work Together

While KYC has a more narrow scope than AML, it serves the broader mission of AML by making it harder for criminals and terrorists to open phony accounts or make fraudulent transactions. Similarly, other AML strategies may help with implementing KYC methods. For example, if a bank uses AML methods to flag  a suspicious deposit, this may get reported to a database which is then available for another bank applying KYC methods, alerting the second bank if the same individual or organization which made the suspicious deposit attempts to open another account where they can transfer the money. So while AML and KYC are distinct, they’re not separate, but they support each other.